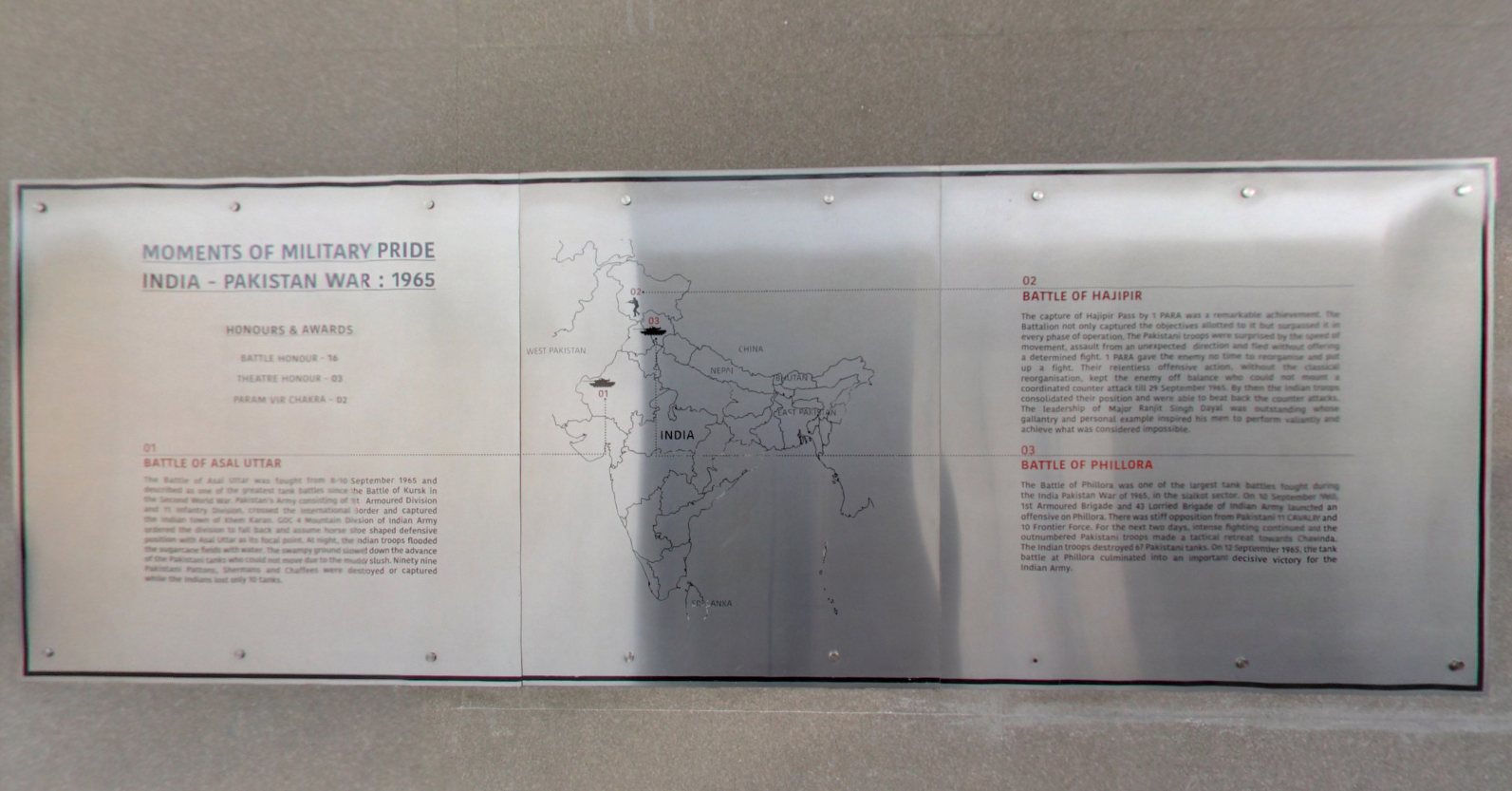 The Battle of Asal Uttar was fought from 8 to 10 September 1965. The Indian resistance near Khem Karan is considered as one of the key turning points of 1965 India-Pakistan war, one which tilted the balance in favour of India. The Battle Group of Pakistan Army comprising of 1st Armoured Division and 11 Infantry Division, crossed the International Border and captured Indian town of Khem Karan. GOC, 4 Mountain Division, sensing the gravity of situation, ordered the division to fall back and assume ‘Horse Shoe’ shaped defensive position with Asal Uttar as its focal point. Indian Army’s 18 RAJPUTANA RIFLES, 1/9 GORKHA RIFLES and 4 GRENADIERS covered three axes to Khem Karan providing depth to 1/9 Gorkha Rifles. 9 JAK RIFLES was deployed in the depth while 9 DECCAN HORSE was deployed ahead, towards South East of the Divisional defences. In a well planned tactical move, the Indian troops breached Rohi canal at night, flooding the sugarcane fields. In the morning, the M-47 and M-48 Patton tanks of 1st Armoured Division of Pakistan were lured inside the horse-shoe shaped defensive position to overrun the Indian defences. However, the swampy ground slowed down the advance of the Pakistani tanks, who eventually could not move due to the muddy slush. When M-47 and M-48 Patton tanks were within 900 mtrs from the main defences, 9 DECCAN HORSE equipped with shermans, engaged them with impunity and knocked off 11 Pakistani tanks. In all, ninety nine Pakistani Pattons, Shermans and Chaffees were destroyed or captured while the Indian Army lost only 10 tanks. War historians consider this to be one of the greatest tank battles since the Battle of Kursk, fought during World War-II.

The capture of Hajipir Pass by 1 PARA was a remarkable achievement. The Battalion not only captured the objectives allotted to it but surpassed it in every phase of operation. The Pakistani troops were surprised by the speed of movement, assault from an unexpected direction and fled without offering a determined fight. 1 PARA gave the enemy no time to reorganise and put up a fight. Their relentless offensive action, without the classical reorganisation, kept the enemy off balance who could not mount a coordinated counter attack till 29 September 1965. By then the Indian troops consolidated their position and were able to beat back the counter attacks. The leadership of Major Ranjit Singh Dayal was outstanding whose gallantry and personal example inspired his men to perform valiantly and achieve what was considered impossible.

The Battle of Phillora was one of the fierces tank battles fought during the India- Pakistan War of 1965, in the Sialkot sector. It coincided with the Battle of Asal Uttar.

On 10 September 1965, India’s 1st Armoured Brigade and 43 Lorried Brigade launched an offensive in Phillora. There was stiff resistance from Pakistani 11 CAVALRY and 10 Frontier Force. For the next two days intense fighting continued and the outnumbered Pakistani units were forced by the determined Indian troops to make a retreat towards Chawinda. Pakistani air attacks could do little to stop the determined Indian assault. On 11 September 1965, HORSE of Indian Army launched an attack on Phillora. The southern thrust of the attack advanced between Phillora and Chawinda. It was met with the Pakistani Army’s heavy armour charge from Wazirwali. The Indian regiment held its ground and gallantly attacked Phillora under enemy’s continuous tank and artillery fire. When wounded, the Commanding Officer refused to be evacuated. He led his regiment to capture Wazirwali on 14 September, and Jassoran and Butur-Dograndi on 16 September 1965. Inspired by his leadership, the regiment fiercely attacked the enemy armour and destroyed approximately sixty Pakistani tanks, suffering only nine tank casualties. On 12 September 1965, the tank battle at Phillora ended in an important decisive victory for the Indian Army with the Pakistani forces retreating and regrouping to put up a last stand Chawinda. The continued thrust by the Indian Army into Pakistani territory finally culminated in the Battle of Chawinda, where the Indian advance was halted due to declaration of ceasefire.