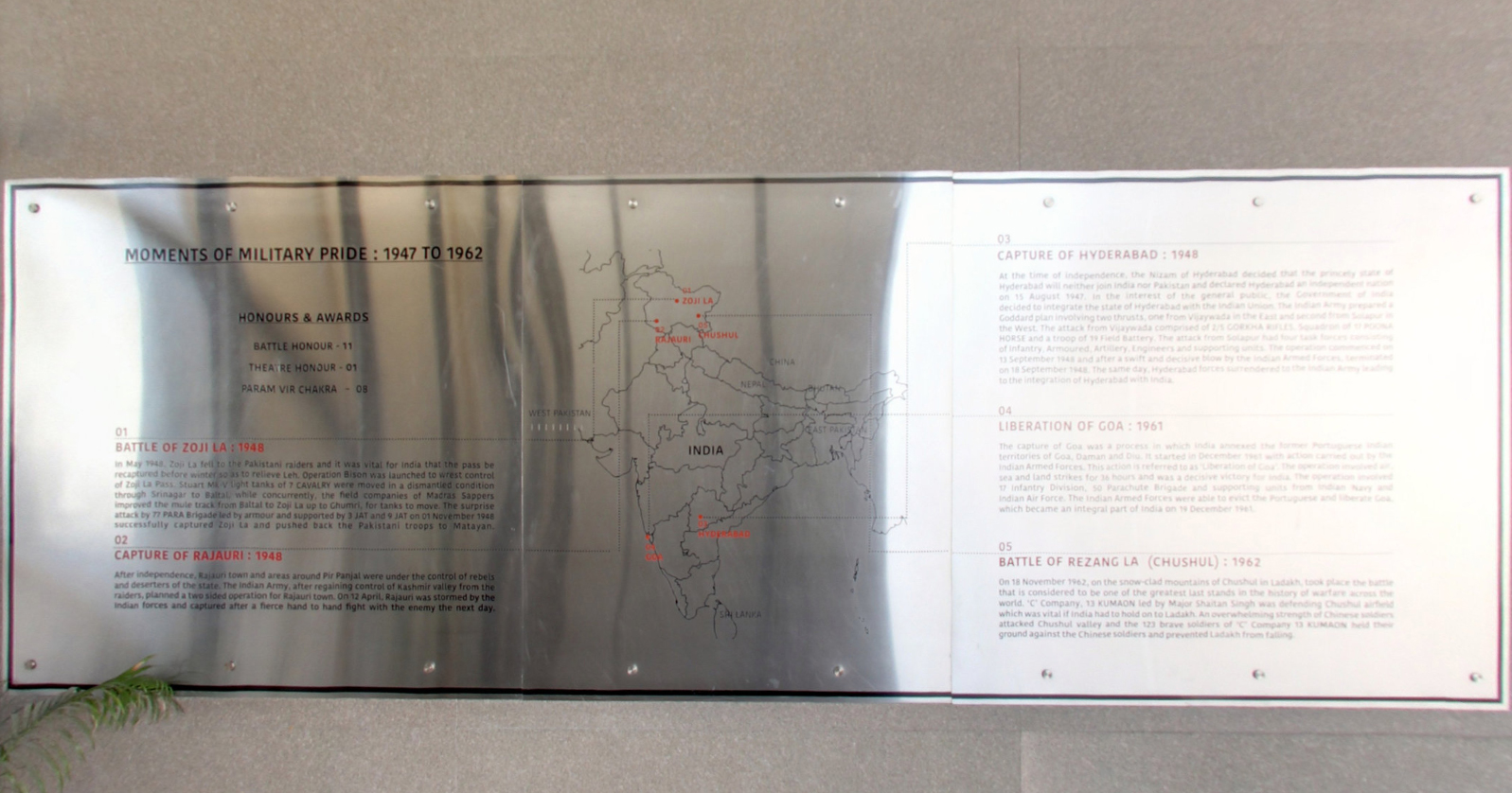 In May 1948, Zoji La fell to the Pakistani raiders and it was vital for India that the pass be recaptured before winter so as to relieve Leh. Operation Bison was launched to wrest control of Zoji La Pass. Stuart Mk-V light tanks of 7 CAVALRY were moved in a dismantled condition through Srinagar to Baltal, while concurrently, the field companies of Madras Sappers improved the mule track from Baltal to Zoji La up to Ghumri, for tanks to move. The surprise attack by 77 PARA Brigade led by armour and supported by 3 JAT and 9 JAT on 01 November 1948 successfully captured Zoji La and pushed back the Pakistani troops to Matayan.

After independence, Rajauri town and areas around Pir Panjal were under the control of rebels and deserters of the state. The Indian Army, after regaining control of Kashmir valley from the raiders, planned a two sided operation for Rajauri town. On 12 April, Rajauri was stormed by the Indian forces and captured after a fierce hand to hand fight with the enemy the next day.

At the time of independence, the Nizam of Hyderabad decided that the princely state of Hyderabad will neither join India nor Pakistan and declared Hyderabad an independent nation on 15 August 1947. In the interest of the general public, the Governemnt of India decided to integrate the state of Hyderabad with the Indian Union. The Indian Army prepared a Goddard plan involving two thrusts, one from Vijaywada in the East and second from Solapur in the West. The attack from Vijaywada comprised of 2/5 GORKHA RIFLES, Squadron of 17 POONA HORSE and a troop of 19 Field Battery. The attack from Solapur had four task forces consisting of Infantry, Armoured, Artillery, Engineers and supporting units. The operation commenced on 13 September 1948 and after a swift and decisive blow by the Indian Armed Forces, terminated on 18 September 1948. The same day, Hyderabad forces surrendered to the Indian Army leading to the integration of Hyderabad with India.

The capture of Goa was a process sin which India annexed the former Portuguese Indian territories of Goa, Daman and Diu. It started in December 1961 with action carried out by the Indian Armed Forces. This action is referred to as ‘Liberation of Goa’. The operation involved air, sea and land strikes for 36 hours and was a decisive victory for India. The operation involved 17 Infantry Division, 50 Parachute Brigade and supporting units from Indian Navy and Indian Air Force. The Indian Armed Forces were able to evict the Portuguese and liberate Goa, which became an integral part of India on 19 December 1961.

On 18 November 1962, on the snow-clad mountains of Chushul in Ladakh, took place the battle that is considered to be one of the greatest last stands in the history of warfare across the world. ‘C’ Company, 13 KUMAON led by Major Shaitan Singh was defending Chushul airfield which was vital if India had to hold on to Ladakh. An overwhelming strength of Chinese soldiers attacked Chushul valley and the 123 brave soldiers of ‘C’ Company 13 KUMAON held their ground against the Chinese soldiers and prevented Ladakh from falling.