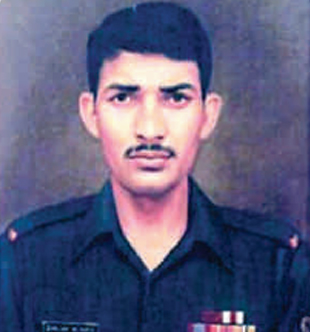 During Operation Vijay, Rifleman Sanjay Kumar was the leading Scout of a company of 13 JAK RIF for the capture of area Flat Top on 04 July 1999 in Mushkoh Valley, Jammu & Kashmir. Having scaled the cliff, he came under effective enemy fire from a bunker. In the ensuing hand-to-hand combat, he killed three of the intruders and was himself seriously injured. Taken totally by surprise, the enemy left behind a Universal Machine Gun and started running. Rifleman Sanjay Kumar picked up the UMG and killed the fleeing enemy. The brave action on his part motivated his comrades to charge on to the enemy and capture area Flat Top. For exhibiting an act of indomitable courage and gallantry of the highest order, he was awarded the Param Vir Chakra.