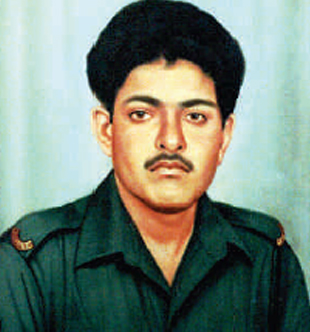 During Operation Vijay, Grenadier Yogender Singh Yadav of 18 GRENADIERS was part of the Ghatak Platoon tasked to capture Tiger Hill Top in Drass, Jammu & Kashmir. On 03 July 1999, under heavy enemy fire, he and his team scaled a snowbound vertical cliff face and silenced the bunker to allow the rest of Platoon to scale the cliff. Inspite of having been hit by three bullets in his groin and shoulder, displaying superhuman strength, he charged on to the second bunker and neutralised it, killing three Pakistani soldiers. Inspired by his gallant act, the platoon charged onto the other positions with renewed courage and captured Tiger Hill Top. For exhibiting an act of indomitable courage and gallantry of the highest order, he was awarded the Param Vir Chakra.