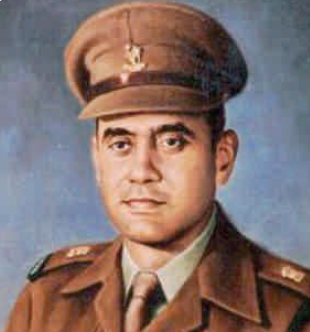 Major Shaitan Singh was commanding a company of 13 KUMAON at Rezang La in Jammu & Kashmir at a height of about 17,000 feet. On 18 November 1962, Chinese troops attacked his location with overwhelming strength. Major Shaitan Singh dominated the scene of operations and moved from one platoon post to another at great personal risk, sustaining the morale of his troops. Despite being grievously wounded he continued to encourage and lead his men, who, following his brave example fought gallantly and inflicted heavy casualties on the enemy. When his men tried to evacuate him, he refused and kept motivating them to keep fighting, till he breathed his last. For his conspicuous bravery, inspiring leadership and supreme sacrifice, he was awarded the Param Vir Chakra (Posthumous).