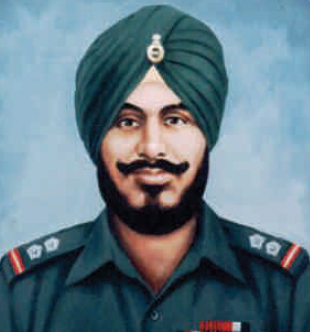 On 23 October 1962, Subedar Joginder Singh's platoon of 1 SIKH repulsed two Chinese attacks in Bumla, Arunachal Pradesh, wherein the enemy suffered heavy losses. His platoon had by then lost half its men. The JCO was wounded in the thigh but refused to be evacuated. Under his inspiring leadership, the platoon stubbornly held its ground, when the position was attacked for the third time. Subedar Joginder himself manned an LMG and shot down a number of enemy troops. Ultimately their ammunition got exhausted. Subedar Joginder motivated and led his men into a bayonet fight and attained martyrdom while fighting numerically superior enemy in this epic battle. For exhibiting an act of conspicuous gallantry, inspiring leadership, indomitable courage and supreme sacrifice, he was awarded the Param Vir Chakra (Posthumous).