Battles which led to Indian Victory in 1971 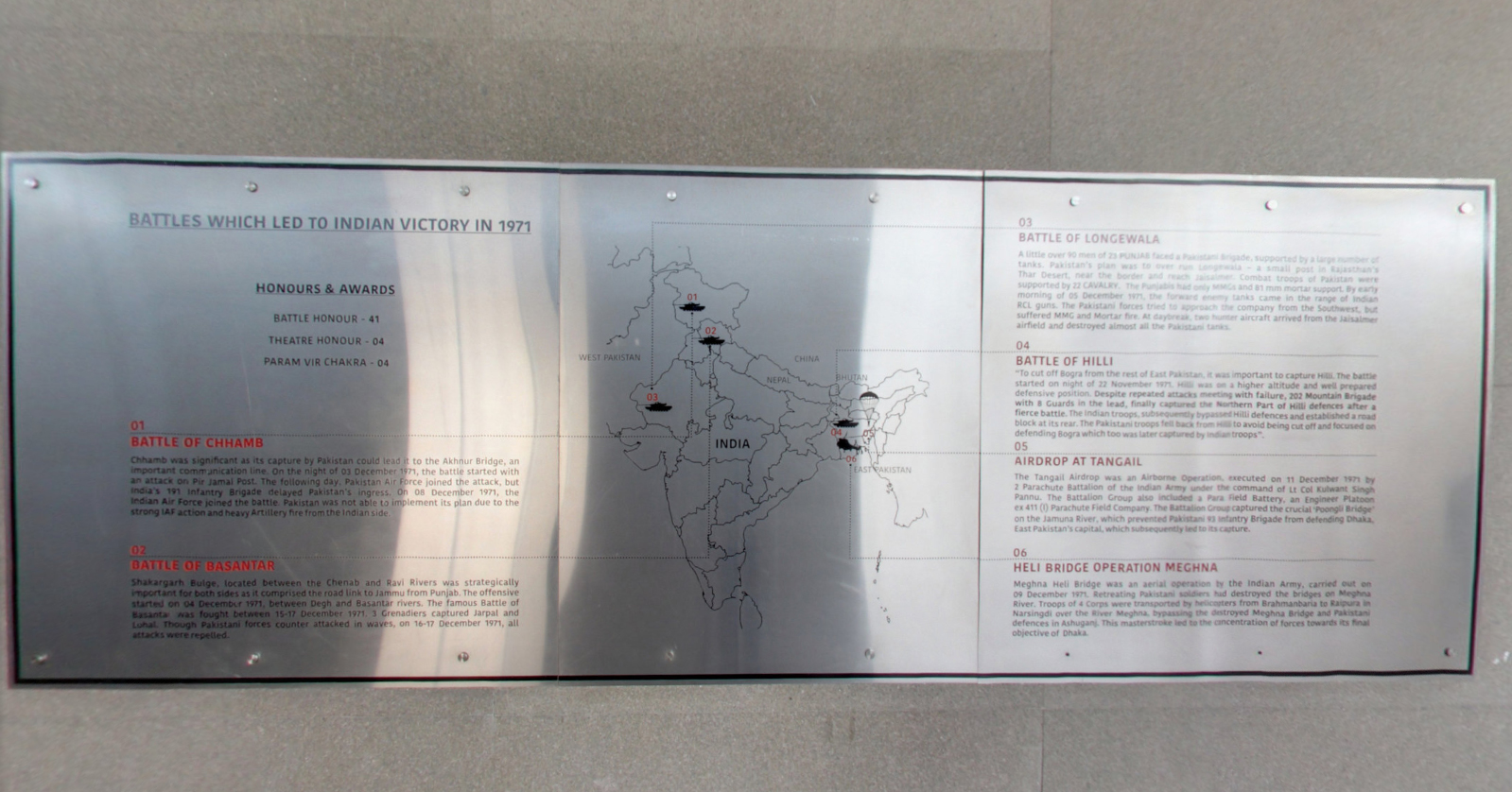 Chhamb was significant as its capture by Pakistan could lead it to the Akhnur Bridge, an important communication line. On the night of 03 December 1971, the battle started with an attack on Pir Jamal Post. The following day, Pakistan Air Force joined the attack, but India’s 191 Infantry Brigade delayed Pakistan’s ingress. On 08 December 1971, the Indian Air Force joined the battle. Pakistan was not able to implement its plan due to the strong IAF action and heavy Artillery fire from the Indian side.

Shakargarh Bulge, located between the Chenab and Ravi Rivers was strategically important for both sides as it comprised the road link to Jammu from Punjab. The offensive started on 04 December 1971, between Degh and Basantar rivers. The famous Battle of Basantar was fought between 15-17 December 1971. 3 Grenadiers captured Jarpal and Lohal. Though Pakistani forces counter attacked in waves, on 16-17 December 1971, all attacks were repelled.

A little over 90 men of 23 PUNJAB faced a Pakistani Brigade, supported by a large number of tanks. Pakistan’s plan was to over run Longewala - a small post in Rajasthan’s Thar Desert, near the border and reach Jaisalmer. Combat troops of Pakistan were supported by 22 CAVALRY. The Punjabis had only MMGs and 81 mm mortar support. By early morning of 05 December 1971, the forward enemy tanks came in the range of Inian RCL guns. The Pakistani forces tried to approach the company from the Southwest, but suffered MMG and Mortar fire. At daybreak, two hunter aircraft arrived from the Jaisalmer airfield and destroyed almost all the Pakistani tanks.

“To cut off Bogra from the rest of East Pakistan, it was important to capture Hilli. The battle started on night of 22 November 1971. Hilli was on a higher altitude and well prepared defensive position. Despite repeated attacks meeting with failure, 202 Mountain Brigade with 8 Guards in the lead, finally captured the Northern Part of Hilli defences after a fierce battle. The Indian troops, subsequently bypassed Hilli defences and established a road block at its rear. The Pakistani troops fell back from Hilli to avoid being cut off and focused on defending Bogra which too was later captured by Indian troops”.

The Tangail Airdrop was an Airborne Operation, executed on 11 December 1971 by 2 Parachute Battalion of the Indian Army under the command of Lt Col Kulwant Singh Pannu. The Battalion Group also included a Para Field Battery, an Engineer Platoon ex 411 (I) Parachute Field Company. The Battalion Group captured the crucial ‘Poongli Bridge’ on the Jamuna River, which prevented Pakistani 93 Infantry Brigade from defending Dhaka, East Pakistan’s capital, which subsequently led to its capture.

Meghna Heli Bridge was an aerial operation by the Indian Army, carried out on 09 December 1971. Retreating Pakistani soldiers had destroyed the bridges on Meghna River. Troops of 4 Corps were transported by helicopters from Brahmanbaria to Raipura in Narsingdi over the River Meghna, bypassing the destroyed Meghna Bridge and Pakistani defences in Ashuganj. This masterstroke led to the concentration of forces towards its final objective of Dhaka.