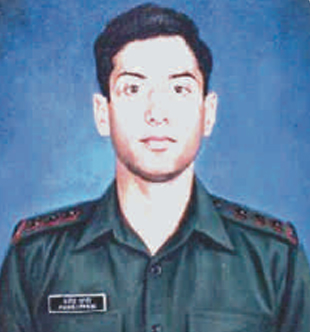 During Operation Vijay, Lieutenant Manoj Kumar Pandey of 1/11 GORKHA RIFLES was tasked to clear Khalubar Ridge in Batalik, Jammu & Kashmir. On 03 July 1999 as his company was advancing, it came under heavy enemy fire. He fearlessly assaulted the enemy, killing four enemy troops and destroying two bunkers. Although wounded in the shoulder and leg, he closed in on the first bunker and in a ferocious hand-to-hand combat, killed two more and cleared the bunker. He continued to lead his men clearing bunker after bunker, until he got a fatal burst on his forehead. Inspired by his raw courage, his troops kept charging at the enemy and ultimately captured the post. For exhibiting an act of most conspicuous gallantry and supreme sacrifice, he was awarded the Param Vir Chakra (Posthumous).