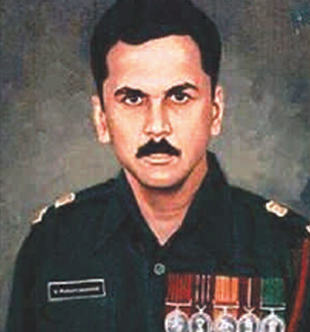 On 25 November 1987, when Major Ramaswamy Parameswaran of 8 MAHAR was returning from a search operation in Sri Lanka, his column was ambushed by a group of militants. With cool presence of mind, he encircled the militants from the rear and attacked them, taking them completely by surprise. During the hand-to-hand combat, a militant shot him in the chest. Undaunted, Major Parameswaran snatched back the rifle from the militant and shot him dead. Gravely wounded, he continued to give orders and inspired his command till he breathed his last. His courageous actions resulted in five militants getting killed and numerous weapons and ammunition being recovered. Major Ramaswamy Parameswaran displayed conspicuous gallantry and inspiring leadership and made the supreme sacrifice, for which he was awarded the Param Vir Chakra (Posthumous).