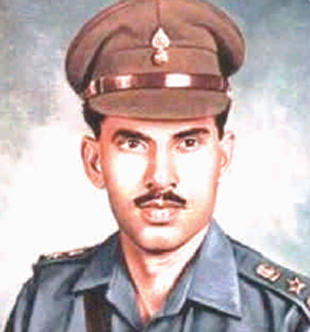 On 15 December 1971, during India-Pakistan War Major Hoshiar Singh was commanding a company of 3 GRENADIERS and was ordered to capture the enemy locality of Jarpal. During the assault, his company came under intense shelling. Undeterred, he led the charge and captured the objective after a fierce hand-to-hand fight. The enemy reacted and put in several counter attacks. Despite being wounded he moved from trench to trench motivating his soldiers to shoot every enemy in sight. At that time, an enemy shell landed near the Medium Machine Gun post, injuring the crew and rendering it inoperative. Major Hoshiar Singh, realizing its importance, rushed and manned the gun, inflicting heavy casualties on the enemy. The attack was successfully repulsed and the enemy retreated. For his dauntless leadership and indomitable fighting spirit, he was awarded the Param Vir Chakra.