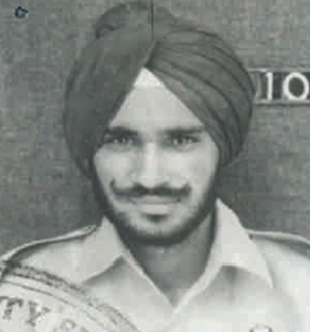 On 14 December 1971, Srinagar airfield was bombed and strafed by six Pakistani Sabre aircraft. Inspite of immense risk to life for attempting to take off during the air attack, Flying Officer Nirmal Jit Singh Sekhon of 18 Squadron, who was a Gnat pilot, took off and immediately engaged a pair of the attacking Sabres. He secured hits on one aircraft and damaged another. By this time four more Pak Sabre aircraft came to the rescue of their aircraft, which was locked in an air-combat with Indian Gnat. In the ensuing combat his aircraft was shot down by one of the Sabres. The sublime heroism, supreme gallantry and determination displayed by Flying Officer Sekhon in the face of certain death set new heights in Air Force traditions, for which he was awarded the Param Vir Chakra (Posthumous).